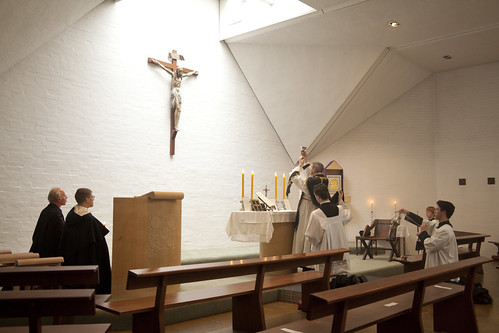 Update, 2021: although agreeing to other EF Masses in chaplaincy since 2018, Fr Powers has declined to allow a Requiem as previously agreed this year--or other traditional Masses--in light of Traditionis Custodes.
Update, 2018: with the agreement of the Chaplain, Fr Matthew Power SJ, a second Traditional Requiem Mass was celebrated in the Chaplaincy, on Saturday 3rd November at 10 am. The celebrant was again Fr Daniel Seward of the Oxford Oratory.

On Saturday 2nd November, All Souls Day, 2013, Fr Daniel Seward of the Oxford Oratory celebrated a Sung Mass in the Extraordinary Form in the St Thomas More Chapel of the Oxford University Catholic Chaplaincy. It was attended by fifty students and others, including the Chaplain, Fr Simon Bishop SJ, and his assistant Fr Dushan Croos SJ, and was served and accompanied by students.

This was the first public Mass in the Extraordinary Form ever offered in the St Thomas More Chapel. This is very much in contrast with the Cambridge University Catholic Chaplaincy, where an annual EF Requiem has been celebrated for many years, and now Low Mass in the EF is celebrated every Sunday of Term at 8am.

The Mass in Oxford was offered for deceased members and employees of the University: those who, during their lives, had been members of the community the Catholic Chaplaincy exists to serve.