Sung Mass in the Extraordinary Form is celebrated quarterly, on Sundays. 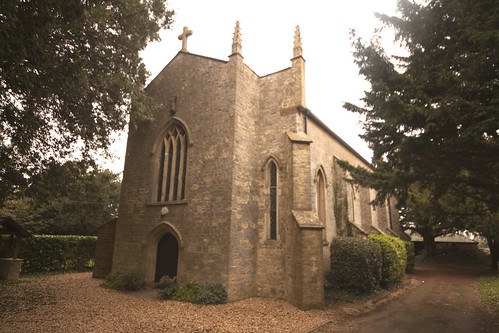 A few details about the church culled from 'Hethe-with-Adderbury: the story of a Catholic parish in Oxfordshire' by Joy Grant (Archdiocese of Birmingham Historical Commission, 2000).

Holy Trinity was the fourth Catholic church to be built in Oxfordshire following the Roman Catholic Relief Act of 1791. The others were: Mapledurham (1797), St Ignatius' in Oxford (c1800), which has been converted to secular uses, and St Mary's, a chapel at Heathrop which has been demolished (1826). 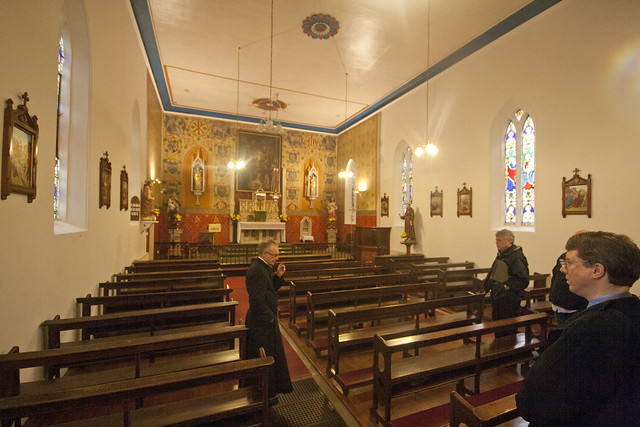 The church was opened in 1832; the architect is unknown, but the cost was £800. It was opened by Bishop Thomas Walsh of the Midlands District.

It replaced the chapel in Tusmore House as the centre of Catholic worship in the area. The Fermor family had been forced to let the house out to non-Catholics, and the current head of the family was not an active Catholic.

The priest who built the church was the young Fr Alfred McGuire (1800-1878). In 1847 he left under something of a cloud following some financial scandal, and ministered to the convicts of Van Dieman's Land (Tasmania) until 1871, when he retired and spent his last years in his native to Stoke on Trent.

The decoration on the East wall was done for the church's centenary, 1932. The designers are unknown but the work was carried out by Italian workmen. Originally it extended down the side walls, but this decayed over time and was painted over in the 1980s. It replaced less elaborate stencilling.

The priest responsible was Fr Ignatius McHugh, who had arrived in 1930. Not long afterwards he was diagnosed with a brain tumour and had to retire, dying in 1938 at the age of 55.

The painting over the Altar is an early 18th century copy (in mirror-image, from an engraving) of La Descente de Croix by Jean Jouvenet (1644-1717), now in the Louvre. It was much copied in the 18th century, and may have hung in the Fermors' chapel.

Fr George Smith celebrated the Traditional Mass for the Latin Mass Society from the English Indult in 1971 until his departure to Burford in 1976, on Sunday afternoons; he attracted supporters from Northampton, Fairford in Gloucestershire, and Swindon.

More recently, the EF was reintroduced by Fr Paul Lester, Parish Priest from 2015-'17; it has continued to be celebrated in the church since his move to the parish of Wednesbury.

The stained glass is in memory of members of the Collingridge family. They were probably designed by Francis Barnett, who married a Collingridge in 1838 (the ones closer to the Altar), and his son William (the two nearest the back).  Corporal Alfred Collingridge died in the service of the Pope as a Zouave, in 1866, aged 20.

The organ is an English chamber organ dating from 1800-1820; it came to the church in 1979, and has been converted to work on electricity. 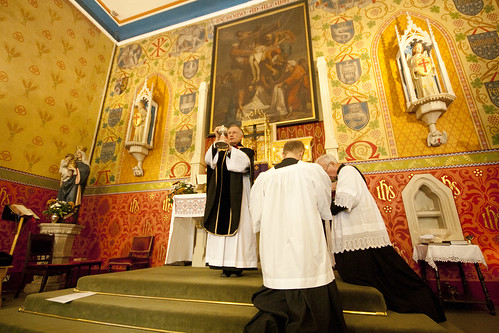 Support the work of the LMS by becoming an 'Anniversary Supporter'.